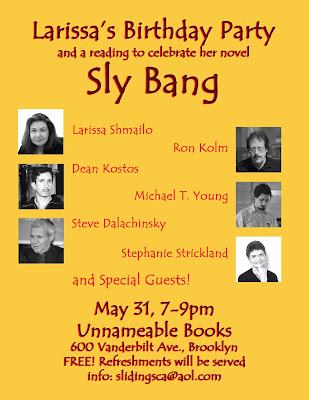 
Larissa Shmailo is a poet, novelist, translator, editor, anthologist, and critic. Her poetry collections are Medusa’s Country, #specialcharacters, In Paran, the chapbook A Cure for Suicide, and the e-book Fib Sequence; her other novel is Patient Women. Her poetry CDs are The No-Net World and Exorcism, available through Spotify, Amazon, iTunes, Deezer, and other digital distributors. Shmailo’s work has appeared in Plume, the Brooklyn Rail, Fulcrum, the Journal of Feminist Studies in Religion, the Journal of Poetics Research, Drunken Boat, Barrow Street, Gargoyle, and the anthologies Measure for Measure: An Anthology of Poetic Meters, Words for the Wedding, Contemporary Russian Poetry, Resist Much/Obey Little: Poems for the Inaugural, Verde que te quiero verde: Poems after Garcia Lorca, and many others.

Shmailo is the original English-language translator of the world’s first performance piece, Victory over the Sun by Alexei Kruchenych, performed at the Los Angeles County Museum of Art, the Garage Museum of Moscow, the Brooklyn Academy of Art, and theaters and universities worldwide. Shmailo also edited the anthology Twenty-first Century Russian Poetry and has been a translator on the Russian Bible for the American Bible Society.

Shmailo’s work is in the libraries of Harvard, Princeton, Yale, Stanford, and New York universities, the Hirshhorn Museum of the Smithsonian, the Museum of Modern Art (MoMA), the New York Museum of Natural History, and other universities and museums.

She received honorable mention in the Compass Award for Russian literary translation in 2011, the Elizabeth P. Braddock poetry prize in 2012, and the Goodreads May 2012 poetry contest; she was a finalist in the Glass Woman prose prize in 2012, and a semifinalist in the Subito Press/University of Boulder prose competition. Larissa also received the New Century Music awards for best spoken word with rock, jazz, and electronica in 2009, as well as the best album award for Exorcism. She has read at the Knitting Factory, Barnard College, the New School, New York University, the Langston Hughes residence, and for American Express/Share Our Strength.

She blogs at http://larissashmailo.blogspot.com/
Please visit her website at www.larissashmailo.com.
Posted by Kylah Balthazar at 5:04 PM