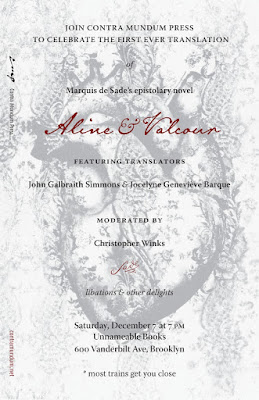 Posted by Alexander at 4:19 PM No comments: 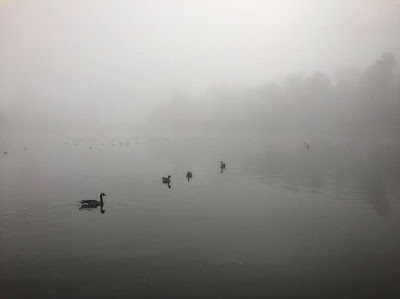 Please join us Friday, November 22nd at 7 pm for a night of music and poetry.

Prajna Desai will read from her new book why not again a love story from Planta Baja Press. The chapbook-length poem  is a meditation on the molecular and narrative forces of language as the locus for human engagement.  Desai weaves mordant satire, raw emotion and razor-sharp intellect with an ease and clarity of voice in this exhilarating experiment in narrative poetry. And a stellar group of musicians: Leo Chang (voice, electronics), Nicola Hein (guitar, objects), James Ilgenfritz (bass, objects), and Muyassar Kurdi (voice, electronics) will be performing in a series of arrangements and combinations.

Prajna Desai is an art historian and writer of fiction. Her scholarship deals with visual politics, print culture, and built form at the intersection of nineteenth and twentieth century intellectual histories and narratives of science. She lives across languages and resides in Brooklyn. Bombay is home.

Leo Chang is a composer and musician currently living in New York. Born in Seoul, Leo lived as an expat in Singapore, Taipei, and ultimately, Shanghai during his formative years. The tensions between identity, residency, and rootlessness inform his artistic practice and research. Leo’s music has been described as having a “dark strength” that is “compelling” (TheatreScene.net). Leo is the co-founder and director of Consensus, an experimental ensemble that confounds the boundaries between improvisation and composition via processual groupwork. He strives to work with musicians with disparate backgrounds: from ensembles such as the JACK quartet, Bearthoven, and the RighteousGIRLS, to students, friends, children, or anyone who is curious enough to work with him in a creative capacity. Leo has presented his music and research at various conferences and festivals: notably the International Computer Music Conference, the Society of Electro-Acoustic Music in the United States National Conference, and the New York City Electroacoustic Music Festival.

Nicola L. Hein (*1988 in Düsseldorf) is a guitarist, composer, philosopher and soundartist. As a guitarist he is mainly concerned about the search for new sounds on his instrument. He plays electric and acoustic guitar with or without preperations and tries to find new ways of playing the guitar within the context of Free Improvised Music and Jazz. He plays the guitar with his hands and plectrum but also with a lot of different objects: screws, rulers, iron wool, violin bow, abrasive paper, magnets and many other objects which are part of his musical vocabulary. The result is his very own world of sounds, which is using the rich potential of the guitar as a creator of sounds. The manual creation is a very important character of this sound world, which never gets distorted by the use of electronic effects. As a composer he finds different ways of integrating philosophical ideas into music and to play music as a form of philosophy. In order to actualize itself the compositional work is always aimed at the improvising musician as a dialectic partner of the composition. From the interplay of these partners an ästhetic emerges that is based on the spontanity of the performance and the setting of aesthetic action spaces alike.

Bassist and composer James Ilgenfritz has worked in New York’s experimental music community for ten years, interacting with visual artists, improvisers, composers, and literary figures. As an improviser James has performed with Anthony Braxton, John Zorn, Elliott Sharp, Anthony Coleman, Jin Hi Kim, Jon Rose, Steve Swell, Nate Wooley, Jeremiah Cymerman, and Brian Chase. As an interpreter of notated music, he has also worked with composers Lukas Ligeti, JG Thirlwell, Annie Gosfield, Pauline Oliveros, Ted Hearne, David T. Little, Karin Rehnqvist, Duane Pitre, Kevin Norton, & Gordon Beeferman. He recently completed a tour of the Midwest and northeast with his jazz quartet MiND GAMeS (with Denman Maroney, Andrew Drury, Angelika Niescier). His debut solo recording ‘Compositions (Braxton) 2011’ features his distinctive solo bass interpretations of the music of Anthony Braxton, and was called “a considerable achievement of solo instrumentalism and an important demonstration of the possibilities open to the double bass in the early 21st century” by Avant Music News’s Dan Barbiero. Current projects include his longstanding Anagram Ensemble (which has morphed from jazz quartet to experimental big band to avant-garde theatrical chamber ensemble), Hypercolor (with Lukas Ligeti and Eyal Maoz), Red Triangle (with Chuck Bettis and Nonoko Yoshida), COLONIC YOUTH (with Dan Blake, Philip White, and Kevin Shea), The Curators (with Joe Hertenstein and Mikko Innanen) and Radiant Tongues (with Jason Ponce). In 2011 James was Artist In Residence at Issue Project Room, where he premiered his opera The Ticket That Exploded (based on the 1962 William S. Burroughs novel of the same name). He is coordinator of the WSB100 festival, New York City’s month-long celebration of the life and legacy of William S. Burroughs on the occasion of his 100th birthday. James Ilgenfritz holds degrees from University of Michigan & University of California San Diego, and is on faculty at Brooklyn College Preparatory Center & Brooklyn Conservatory.

Muyassar Kurdi (b. 1989 in Chicago) is a New York City-based interdisciplinary artist. Her work encompasses sound art, extended vocal technique, performance art, movement, photography, and film. She has toured extensively in the U.S. and throughout Europe. A versatile improviser, Muyassar has composed and performed music for voice, harmonium, piano, lyre, autoharp, theremin, bass, and cello. She currently focuses her attention to interweaving homemade electronic instruments and sculpture into her vocal and dance performances, stirring a plethora of emotions from her audience members through vicious noise, ritualistic chants, and meditative movements. Most recently she completed SEVEN VOICES, a multi-channel project for seven voices, which was recorded during her artist residency at EMS in Stockholm February 2018. She also released Travelling on NORENT Records and Intersections and Variations on Astral Spirits in early 2018.

Posted by Kylah Balthazar at 4:54 PM No comments: 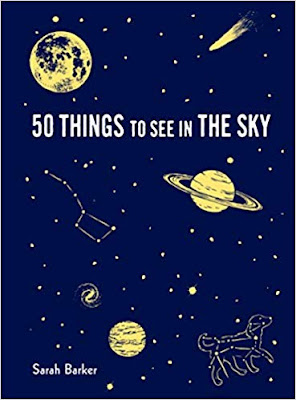 Join us Wednesday, November 20th at 7 pm to celebrate the launch of 50 Things to See in the Sky by Sarah Baker

50 Things to See in the Sky is a hip and handy guide helps you learn the science behind blue skies, sun dogs, and the solar eclipse, and shows you how to observe nocturnal wonders such as lunar halos, Martian ice caps, and far-off galaxies. Fifty celestial phenomena come to life with expert tips from astrophysicist Sarah Barker and stylish illustrations by Maria Nilsson. Any explorer can become an adept observer with their guidance, and more ambitious stargazers will be able to discover more distant sights with the help of binoculars, a telescope, or a local astronomy group. With a glow-in-the-dark cover, 50 Things to See in the Sky is a perfect complement to your next camping expedition and a wonderful gift for anyone who marvels at what lies in our celestial sphere.

On November 20 at 7pm Rachel Karpf will be asking Sarah Baker some Q's and she'll be giving some A's. You can also ask your own Q's.

Sarah says, "Then I can sign your books! I'll even draw some very childish stars and planets if you like....."

50 Things to See in the Sky: “A beautifully presented, practical gift guide to 50 sights in the skies above us – complete with a glow-in-the dark front cover. Explained with fascinating, easy-to-understand commentary from astrophysicist and science communicator, Sarah Barker, and illustrated throughout with captivating drawings by Maria Nilsson, each guide helps you locate an incredible sight.” Here’s a full review.


Please spread the word and invite as many people as you'd like :)
Posted by Kylah Balthazar at 4:43 PM No comments: 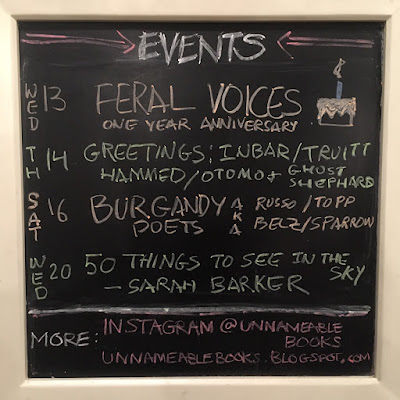 Wednesday 11/20: 50 Things to See in the Sky by Sarah Barker Book Launch


Posted by Alexander at 6:12 PM No comments: