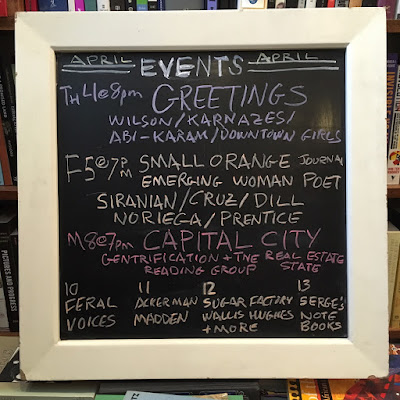 April 8 (M--7pm) Capital City: Gentrification and the Real Estate State State reading group. We are coming together as organizers across New York City working outside the nonprofit industrial complex to study gentrification and "development" in our city. https://www.facebook.com/events/2230797080310740/

April 10 (W--7pm) Feral Voices, a new monthly reading series that focuses on celebrating a selection of writers who work and struggle outside of the typical institutions of the writing community. A night for those who work one or more "day jobs," but have a voice to share that goes against the grain or upends capitalist, patriarchal understandings of the label "author." https://www.facebook.com/FeralVoices/

April 11 (Th--7pm) A reading and discussion with Brittany Ackerman, author of The Perpetual Motion Machine and T Kira Madden, author of Long Live the Tribe of Fatherless Girls.

April 13 (Sat--4pm) Victor Serge’s Notebooks: 1936-1947.
Book release presentation with translator Mitch Abidor and Jacob Pittman.
In 1936, Victor Serge—poet, novelist, and revolutionary—left the Soviet Union for Paris, the rare opponent of Stalin to escape the Terror. In 1940, after the Nazis marched into Paris, Serge fled France for Mexico, where he would spend the rest of his life. His years in Mexico were marked by isolation, poverty, peril, and grief; his Notebooks, however, brim with resilience, curiosity, outrage, a passionate love of life, and superb writing. https://www.facebook.com/events/416234232282786/

Posted by Alexander at 6:14 PM No comments:

We are coming together as organizers across New York City working outside the nonprofit industrial complex to study gentrification and "development" in our city.


Posted by Alexander at 7:15 PM No comments:

Please join us April 5th for a reading and celebration of the winners of Small Orange Journal's Emerging Woman Poet Honor with featured poet Cynthia Cruz. This event is also a fundraiser for the nonprofit organization, Girls Write Now.

Cynthia Cruz is the author of five collections of poems: How the End Begins, Wunderkammer, The Glimmering Room, and Ruin. Her fifth collection of poems, Dregs, was published in Sep-tember of 2018. Cruz is the editor of a forthcoming anthology of contemporary Latina poetry, Other Musics: New Latina Poetry (April 2019) and a collection of essays, Disquieting:Essays on Silence (April 2019). The recipient of fellowships from Yaddo, the MacDowell Colony, and a Hodder fellowship from Princeton University, she teaches at Sarah Lawrence College and Co-lumbia University.

LeConté Dill was born and raised in South Central Los Angeles, the granddaughter of sojourners of the 2nd Wave of the Great Migration. “LeConte” literally means “The Fairytale,” so she listens to, documents, imagines, and create stories of safety, healing, wellness, and justice. She is a scholar, educator, and a poet in and out of classroom and community spaces. LeConté holds degrees from Spelman College, UCLA, and UC Berkeley, has participated in VONA Voices and Cave Canem workshops, and was a 2016 Callaloo Creative Writing Workshop Fellow. She is the Director of Public Health Practice and a Clinical Associate Professor at NYU. Ever transdisciplinary, her work has been published in a diverse array of spaces, such as Poetry Magazine, Mom Egg Review, The Killens Review of Arts & Letters, Journal of Poetry Therapy, and The Feminist Wire. She and her husband Umberto are creating a homeplace in Bed-Stuy, Brooklyn.

Oksana Noriega is a genderqueer Latina and slavery survivor. Her work has been published or is forthcoming in Utterance and Deluge, and has been nominated for a Pushcart Prize. She lives with others.

McCaela Prentice is a student at Saint Lawrence University in upstate New York. She studies Biology/Public Health, and she is minoring in creative writing. She is originally from Bryant Pond, Maine. Most of her family is still up that way, and she spends a lot of time in the western part of the state and Portland. The first poem she ever published, "Junk Drawer Heart", was in her university's Laurentian Magazine. She draws a lot of her inspiration from Maine, and from her travels elsewhere.

Theadora Siranian is a graduate of the MFA Program at the University of Massachusetts, Boston. Her poetry has appeared in DIAGRAM, Meridian, Best New Poets, Ghost City Press, CONSEQUENCE, and Rust + Moth, among others. In 2013, she was a finalist for The Poet’s Billow Pangaea Prize, and in 2014 was shortlisted for both the Mississippi Review Prize and Southword’s Gregory O’Donoghue International Poetry Prize. She currently lives and teaches in Brooklyn.

SUNDAY at 2 PM: join Red Bloom: A Communist Collective as we discuss the historical centrality of slavery and cotton production in the development of industrial capitalism and management. This month's text is a selection from Sven Beckert's Empire of Cotton, and the event will feature a short presentation followed by small group discussions. Afterward, we typically go for food and drinks.

*location is not accessible for those with mobility issues, unfortunately*

We are a revolutionary communist collective based in NYC who aim to develop revolutionary practice relevant to the current conditions in NYC and beyond.
Posted by Kylah Balthazar at 3:39 PM No comments: 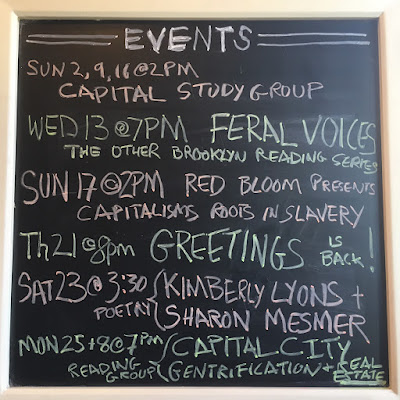 Posted by Alexander at 3:54 PM No comments:

In 1936, Victor Serge—poet, novelist, and revolutionary—left the Soviet Union for Paris, the rare opponent of Stalin to escape the Terror. In 1940, after the Nazis marched into Paris, Serge fled France for Mexico, where he would spend the rest of his life. His years in Mexico were marked by isolation, poverty, peril, and grief; his Notebooks, however, brim with resilience, curiosity, outrage, a passionate love of life, and superb writing.

Serge paints haunting portraits of Osip Mandelstam, Stefan Zweig, and “the Old Man” Trotsky; argues with André Breton; and, awaiting his wife’s delayed arrival from Europe, writes her passionate love letters. He describes the sweep of the Mexican landscape, visits an erupting volcano, and immerses himself in the country’s history and culture. He looks back on his life and the fate of the Revolution. He broods on the course of the war and the world to come after. In the darkest of circumstances, he responds imaginatively, thinks critically, feels deeply, and finds reason to hope.

Serge’s Notebooks were discovered in 2010 and appear here for the first time in their entirety in English. They are a a message in a bottle from one of the great spirits, and great writers, of our shipwrecked time.

Mitch Abidor has published over a dozen volumes of translation, including a collection of Victor Serge's anarchist writings, Anarchists Never Surrender. His writings have appeared in the New York Times, The New York Review of Books, The Paris Review, and Cineaste. Mitch has been translated into German and Turkish. He is currently writing a history of the Bisbee Depredation of 1917.

Jacob Pittman is the editor of Jewish Currents
Posted by Unnameable Books at 2:48 PM No comments:

What does it mean to Spring forth? Green as the Bard says. Gold the painters. Nothing or no one. Each & every one. Glenn Gould greed. Nothing mean. Both this & that. Bricks. The 20th season. Really. So what. Some say the 21st? A Spring can be a thousand years. Maiden, Bankhead, Robeson, Muse... & lovers of, please note the Lineup, often (but not always) on alternating Thursdays, taking place at Unnameable Bokes, 600 Vanderbilt Ave., near the corner of St. Marks, in burgeoning Prospect Heights, Brooklyn. All events start at 8pm with a meet n’ greet. Performances begin 8:30ish in the white rock stone garden or according to the whims of the weather, in the comfortable book-lined basement. All events are free. March 21st: Karen Lepri, Madeleine Braun & Peter Bushyeager with music by Other Ark April 4th: Rachael Guynn Wilson, Anastasios Karnazes & Andrea Abi-Karam with music by Downtown Girls May 2nd: Alexis Ameida, Marisa Crawford, Nathaniel Farrell & Colby Somerville with music by The Superintendents (hopefully) May 16th: Sarah Wang, Rachel Galperin, Filip Marinovic & the Dan Veksler Experience May 30: Lisa Rogal, Denise Milstein, Rachel Pearl & Dan Poppick with Spotless Leopards June 13th: Kelsa Trom, Matt Longabucco, Marie Buck & Amy Matterer with Other Arc Ensemble Thank you all so much for your gracious support of Unnameable Greetings Readings in the past! Hope to see as many old & new faces during this upcoming season. If any other information is needed please email Jeffrey Joe Nelson: jeffreyjoenelson@gmail.com or Jed Shahar: jedshahar@gmail.com
Posted by Unnameable Books at 12:03 PM No comments: