Join us at 6:30pm on Thursday, Feb. 16th for our third installment of the Resist! Film Series. We'll be watching Libertarias, a film about revolutionary feminists during the Spanish Civil War. 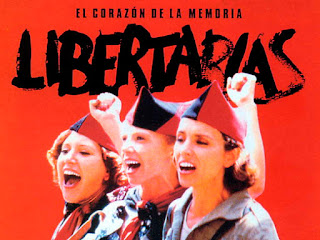 In 1936, Maria, a young nun is recruited by Pilar, a militant feminist, into an anarchist militia following the onset of the Spanish Civil War. Guided by the older woman, Maria is exposed to the realities of war and revolution, and comes to question her former, sheltered life.

While fully immersed in the overall enthusiasm of revolutionary Spain, Pilar and friends find themselves fighting against deep gender inequality which complicates their efforts in the war against Francisco Franco's Nationalist/Fascist/Catholic forces. They encounter resistance even within their own Mujeres Libres organization as one woman tries to persuade them to stay and work in defense factories, while men try to convince them to go work as cooks, not front-line soldiers.


Resist! Film Series is a monthly showcase of films and documentaries that focus on intersectionality, historical and contemporary activist movements, and radical resistance.