[Dec 4] Karthika Naïr "Until the Lions" with Bibi Deitz 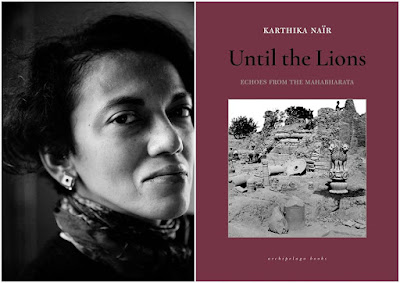 "Most books’ epigraphs don’t slap me in the face, but then Karthika Naïr’s Until the Lions: Echoes from the Mahabharata (Archipelago Books) is not most books, and Naïr is not most writers. Her epigraph quotes Chinua Achebe: “There is that great proverb—that until the lions have their own historians, the history of the hunt will always glorify the hunter…Once I realized that, I had to be a writer. I had to be that historian.” Naïr, in nearly three hundred pages of connected poems, reimagines the story of the Mahabharata as the lions’ story, giving a voice to nineteen of its characters and allowing them each to tell their own account." --Bibi Deitz from her interview with Karthika Naïr in Bomb


"I was keen on exploring the human cost of war beyond victory and defeat, on imagining and chronicling the testimonies of those for whom victory becomes a word without meaning. The families left shattered, distraught siblings and wives, a populace shorn of land and home, those reduced to slavery or serfdom or the reign of another ruler, who’d merely perpetuate an expedient social 'order.' And to examine too, through these accounts, how we can all too easily become complicit in conflict and injustice." — Karthika Naïr

Come hear Karthika discuss Until the Lions, her radical retelling of the Mahabharata. She will be in conversation with Bibi Deitz. A Q&A and signing will follow the discussion.

In "Until the Lions," Karthika Naïr retells the Mahabharata through the embodied voices of women and marginal characters, so often conquered and destroyed throughout history. She captures the richness and complexity of the Mahabharata, while illuminating lives buried beneath the edifices of one of the world’s most venerated books. Through shifting poetic forms, ranging from pantoums to Petrarchan sonnets, Naïr choreographs the cadences of stray voices. And with a passionate empathy, she tells of nameless soldiers, their despairing spouses and lovers, a canny empress, an all-powerful god, and a gender-shifting outcast warrior. "Until the Lions" is a kaleidoscopic, poetic tour de force. It reveals the most intimate threads of desire, greed, and sacrifice in this foundational epic.

Karthika Naïr is the author of several books, including the poetry collection "Bearings" and the children’s fable "The Honey Hunter," illustrated by Joëlle Jolivet. She was the principal scriptwriter of choreographer Akram Khan’s multiple-award-winning solo, DESH (2011), and of its 2015 adaptation for family audiences, "Chotto Desh." Khan's adaptation of one chapter of "Until the Lions" won the 2016 Tanz Award for Outstanding Production. Another adaptation of the book, this time for opera, will premiere in March 2020 at the Opéra national du Rhin in France.

Naïr’s poetry has been widely published in anthologies and journals, including Granta, Prairie Schooner, Poetry Magazine, and The Bloodaxe Book of Contemporary Indian Poets. She was a 2012 Sangam House Fellow, a 2013 Toji Foundation Fellow, and was awarded a Villa Marguerite Yourcenar Fellowship in 2015. Her latest book is the collaborative "Over and Under Ground in Mumbai & Paris," a travelogue in verse, written with Mumbai-based poet Sampurna Chattarji, and illustrated by Joëlle Jolivet and Roshni Vyam.


Bibi Deitz lives and writes in Brooklyn, and grew up in the East Village. Her work has appeared in Storyscape, Paper Darts, Bomb, Bookforum, Vice, The Wall Street Journal and elsewhere. She has been awarded residencies at Virginia Center for the Creative Arts and Vermont Studio Center, and has an MFA in fiction from Bennington College, where she was a Barry Hannah Scholar. She recently finished her first novel, Stand Clear the Closing Doors, and she’s at work on her next book.

Posted by Alexander at 4:13 PM