MAY 3rd, 7PM: IN BLOOM: A NIGHT OF POETRY/MUSIC/WEIRDO DRAG


Spring is Sprung and Brooklyn is in bloom!! Come experience the glow-up / bloom wave magic that is TRES FREEBORN (tres myers), LINGUA FRANCA (mariah parker), REXYLAFEMME (rex renee leonowitch). Music/tunes by TRES FREEBORN & LINGUA FRANCA, poetry/drag/weirdness by REXYLAFEMME. TRES FREEBORN is a songwriter, composer and conceptual artist. Gathering influence from conversations with future and past, Freeborn’s raw and passionate style of afro-future-grunge focuses on collective and relational liberation. Freeborn’s debut album, The Martyr Suite, will be released in Summer 2017.LINGUA FRANCA is a linguist by day, lunatic lady rapper by night. Her music is a mix of literary wordplay, social commentary, personal confession drizzled over sulty boom-bap hip hop beats.https://lingua-franca.bandcamp.com/releaseshttps://www.facebook.com/liiinguafranca/REXYLAFEMME (rex renee leonowitch) is a trans/queer/non-binary femme artist/performer/poet from queens, nyc. their art and performance work is grounded in a politics of radical resistance, healing, and witness. rex's book of poems/illustrations, when there is no one & there is everyone, is forthcoming from magic helicopter press this summer. http://rexylafemme.tumblr.com/ 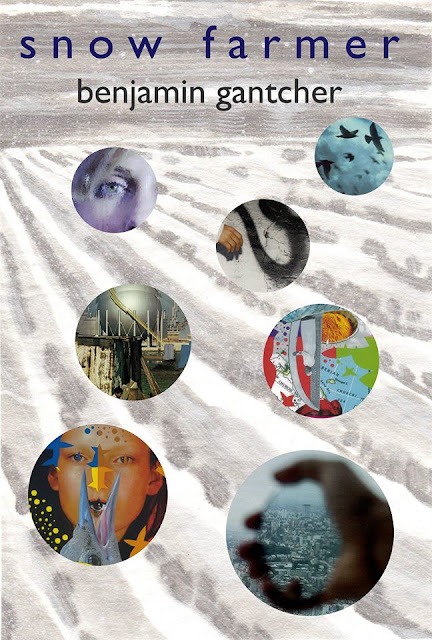 Join us on Friday, April 28th at 7pm for the release party of Ben Gantcher's new book of poetry, Snow Catcher.

Ben Gantcher’s recently completed collection of poems, “Snow Farmer,” was a finalist in the 2014 Omnidawn Open book contest. His first chapbook, “Strings of Math and Custom,” was published in 2013 by Beard of Bees Press and is available online as a free PDF. “If a Lettuce,” his first manuscript of poems, was a finalist in the National Poetry Series and Bright Hill Press contests. His poems have appeared in many journals, including Tin House, Slate, Guernica, and The Brooklyn Rail. He was nominated for a Pushcart Prize, a resident at Ucross and Omi, a correspondent with the Hyde Park Review of Books and a poetry editor of the journal “failbetter.” He teaches math, Language Structures and an interdisciplinary writing and visual art course at Saint Ann’s School in Brooklyn, NY, where he lives with his wife and three children.
Posted by rex at 3:00 PM 1 comment: 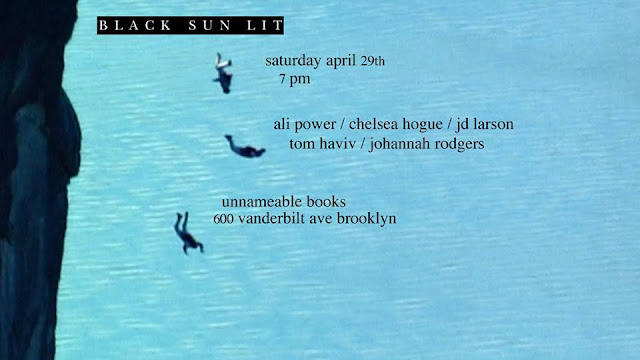 ALI POWER (BSL) is the author of the book-length poem A Poem for Record Keepers (Argos Books, 2016) and the co-editor of New York School Painters & Poets: Neon in Daylight (Rizzoli, 2014). Her poems have appeared in The Brooklyn Rail, LIT, the PEN Poetry Series, Stonecutter and elsewhere. Currently, she is pursuing a master’s degree in social work at New York University and co-curates the KGB Monday Night Poetry Reading Series.

CHELSEA HOGUE (BSL) currently lives and teaches in Western Massachusetts. Her writing has been published in The White Review, The Collagist, Quarterly West, Autre Mag and elsewhere.

JD LARSON (Vestiges_02) is a poet and translator living in Brooklyn. His translation of Nioque of the Early Spring by Francis Ponge is forthcoming from Red Dust in 2017, and recent work has appeared or is forthcoming in Asymptote, The Brooklyn Rail, Gulf Coast, iO: A Journal of New American Poetry, The Volta, Lana Turner and elsewhere. He teaches in the German Department at NYU.

TOM HAVIV (BSL) is a writer, artist and educator from New York City. His work has appeared or is forthcoming in BOMB, Fence, Conjunctions, Prelude, Sakura Review, The Sensation Feelings Journal and elsewhere. His first book, A Flag of No Nation, is forthcoming from The Operating System. He received his MFA from Brooklyn College and is a co-founder of the KAF Collective.

VIRGINIA MCLURE (BSL) is a former Goldwater Fellow in Poetry within New York University’s MFA program, where she completed her thesis under Charles Simic. Her recent writing has appeared or is forthcoming in BOMB, [PANK], Nashville Review, Meridian, Cosmonauts Avenue and elsewhere.
Posted by rex at 2:30 PM No comments:

On Wednesday, April 19th at 6:30pm, join us for a discussion with Fred Moseley.

MONEY AND TOTALITY:
A Macro-Monetary Interpretation of Marx’s Logic In Capital and the End of the “Transformation Problem”
a book discussion with author Fred Moseley

Correcting a longstanding misinterpretation, Moseley argues that there is no ‘transformation problem’ in Marx’s economic theory. This ambitious book presents a comprehensive new ‘macro-monetary’ interpretation of Marx’s logical method in Capital which emphasizes two points: (1) Marx’s theory is primarily a macroeconomic theory of the total surplus-value produced in the economy as a whole; and (2) Marx’s theory is a monetary theory and the circuit of money capital, M-C-M, is its logical framework.

“The complete form of the process is therefore M-C-M’, where M =M + ∆M, i.e. the original sum advanced plus an increment. This increment or excess over the original value I call ‘surplus-value’.” —Karl Marx, Capital, Volume 1

“The capitalists, like hostile brothers, divide among themselves the loot of other people’s labor, so that on an average one receives the same amount of unpaid labor as another.”
—Karl Marx, Theories of Surplus-Value, Volume 2

Fred Moseley is Professor of Economics at Mount Holyoke College. He is the author of The Falling Rate of Profit in the Postwar United States Economy and editor of Marx’s Logical Method: A Reappraisal, New Investigations of Marx’s Method, Heterodox Economic Theories: True or False?, and Marx’s Theory of Money: Modern Reappraisals.
Posted by rex at 4:20 PM No comments:

Join us on Saturday, April 15th at 7pm for a reading with Michael Rothenberg, Ron Kolm, Bonny Finberg, and Steve Dalanchinsky!

Michael Rothenberg will be paying a rare visit to Brooklyn, where he will read at one of the best NYC bookstores: Unnameable Books. He will have copies of Drawing The Shade and Sapodilla with him for sale. Also reading with Michael are Ron Kolm, Bonny Finberg and Steve Dalachinsky. If the weather is good, the reading will be in the cool backyard behind the bookstore. If the weather is not so good, it will be inside. This event is free! BYOB and buy some books from the bookstore!

Michael Rothenberg is a poet, editor and publisher of the online literary magazine BigBridge.org, co-founder of 100 Thousand Poets for Change (www.100tpc.org), and co-founder of Poets In Need, a non-profit 501(c), assisting poets in crisis. He has published 20 books of poetry including Nightmare of The Violins, Favorite Songs, Man/Woman (a collaboration with Joanne Kyger), Unhurried Vision, Monk Daddy, The Paris Journals, Choose, My Youth As A Train, and Murder. His most recent books of poetry include Sapodilla (Editions du Cygne-Swan World, Paris, France, 2016), Drawing The Shade (Dos Madres Press, 2016) and Wake Up and Dream (MadHat 2017). Bi-lingual editions of Indefinite Detention: A Dog Story, and the poetic journals Tally Ho and the Cowboy Dream/The Real and False Journals: Book 5 are due out from Varasek Ediciones Madrid, Spain in Fall 2017. His work has been published widely in literary reviews and included in anthologies such as Ecopoetry: A Contemporary American Anthology, edited by Ann Fisher-Wirth and Laura-Gray Street (Trinity University Press), 43 Poetas por Ayotzinapa, edited by Jesús González Alcántara and Moisés H. Cortés Cruz (Mexico), Saints of Hysteria, A Half-Century of Collaborative American Poetry, edited by David Trinidad and Denise Duhamel (Soft Skull Press), Hidden Agendas/Unreported Poetics, edited by Louis Armand (Litteraria Pragensia), and For the Time-Being: The Bootstrap Book of Poetic Journals, edited by Tyler Doherty and Tom Morgan (Bootstrap Productions). His editorial work includes several volumes in the Penguin Poets series: Overtime by Philip Whalen, As Ever by Joanne Kyger, David’s Copy by David Meltzer, and Way More West by Edward Dorn. Rothenberg is also editor of The Collected Poems of Philip Whalen published by Wesleyan University Press (2007).

Ron Kolm is a founding member of the Unbearables and has helped edit their five anthologies. He is a contributing editor of Sensitive Skin magazine. Ron is the author of The Plastic Factory, Divine Comedy, Suburban Ambush, Duke & Jill and, with Jim Feast, the novel Neo Phobe. A new collection of his short stories, Night Shift, has just been published by Autonomedia. He's had work in Flapperhouse, Great Weather for Media, the Resist Much / Obey Little: Inaugural Poems to the Resistance anthology, The Opiate, Public Illumination Magazine, Local Knowledge and the Outlaw Bible of American Poetry. He edited and introduced an Unbearables section in the Outlaw Bible of American Art. Ron’s papers were purchased by the New York University library, where they’ve been catalogued in the Fales Collection.

Bonny Finberg’s fiction, poetry and photographs are included in numerous literary journals and anthologies. Her work has been translated into French, German, Hungarian and Japanese. Her publications include a short story collection, How the Discovery of Sugar Produced the Romantic Era, (Sisyphus Press, NY), a poetry chapbook with the author's photo collages, Déjà Vu (Corrupt Press, Paris) and a novel, Kali’s Day (Unbearables Books / Autonomedia, NY). Finberg is the recipient of a Kathy Acker award in fiction and has been published in the Best American Erotica series, edited by Susie Bright and The Outlaw Bible of American Poetry, edited by Alan Kaufman. She frequently contributes to Sensitive Skin magazine and A Gathering of the Tribes. Her work has been archived in the New York University Library in the Fales collection. She lives in New York City and is working on her second novel.

Poet/collagist Steve Dalachinsky was born in Brooklyn after the last big war and has managed to survive lots of little wars. His book The Final Nite (Ugly Duckling Presse) won the PEN Oakland National Book Award. His latest cds are The Fallout of Dreams with Dave Liebman and Richie Beirach (Roguart 2014) and ec(H)o-system with the French art-rock group, the Snobs (Bambalam 2015). He has received both the Kafka and Acker Awards and is a 2014 recipient of a Chevalier D’ le Ordre des Artes et Lettres. His poem “Particle Fever” was nominated for a 2015 Pushcart Prize. His most recent books include Fools Gold (2014 feral press), A Superintendent's Eyes (revised and expanded 2013/14 – Unbearable / Autonomedia), Flying Home, a collaboration with German visual artist Sig Bang Schmidt (Paris Lit Up Press 2015) and The Invisible Ray (Overpass Press – 2016) with artwork by Shalom Neuman.
Posted by rex at 8:42 AM No comments: